An 84-year-old patient with severe lung damage thanked staff at Wirral University Teaching Hospital for helping his fight to recover from COVID-19 as he now prepares to become a great-great-grandfather.
Arthur Jacobs, 84, of Circular Drive in Greasby in Wirral, praised staff on Ward 14 at Arrrowe Park Hospital where he made a ‘miracle’ recovery and is now looking forward to meeting his great-great-grandson, set to be born in August, who will be named Arthur after him.
He already had severe lung damage and required oxygen daily when he caught COVID-19 and was admitted to hospital on 5th April.
Arthur said: “It was frightening. I was very unnerved. I lost a day or two when I was out of the game and then I starting getting bits of information coming through. I didn’t know where I was.”
His wife Gina said: “It was just horrendous. I had to prepare myself for the worst. I thought he wouldn’t get through it. In the first two weeks he could hardly speak because he was so weak.
“Then he started to buck up a bit. It was just a miracle because his lungs were already so severely damaged. We were all praying for him.”
The couple who have two children, eight grandchildren and nine great-grandchildren, have praised the hard work of the staff on the ward where he was treated for nearly three weeks.
Arthur said: “The nurses were fantastic. They brought the best out of me.
“I just can’t praise the staff enough and they were so pleasant to me. Despite their great workload they had plenty of time for me. I’m grateful to everybody for everything they have done for me.”
The ward staff formed a line and applauded Arthur as he left the ward and on his return home he was welcomed with applause from his neighbours.
Ellie Moore, Ward Sister on Ward 14 where he was treated, said: “We were really delighted that Arthur made a recovery. All our staff are so dedicated to our patients and worked so hard to care for Arthur. We wanted to wish him well as he left the ward and let him know how much we cared. Now we just wish him all the best as he has returned home.”
Arthur is now looking forward to the birth of his great-great-grandson Arthur in August.
He added: “I never thought of anyone being named after me and I’m really looking forward to it. I’m feeling great now. I’m feeling more positive and just want to move on to the next step. I’d also like to say a big thank you to all my family and all my neighbours in Circular Drive for all their support.”
-ends- 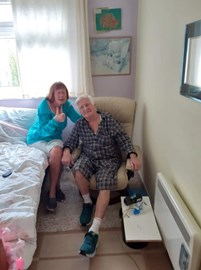 PHOTO:
Arthur Jacobs and his wife Gina at home in Greasby, Wirral after he recovered from COVID-19