A patient who is in the later stages of cancer married her long term partner at a special wedding ceremony on a ward at Wirral University Teaching Hospital.

She has been an inpatient at Arrowe Park Hospital since March and staff on Ward 14 rallied quickly to create a special wedding day for the couple who live in Heswall.

A room on the ward was decorated with balloons and the couple had wedding cakes donated by people in the community. They said their vows in front of hospital staff and two of their close friends.

Jean said: “We were flooded with balloons and flowers. Carole was very happy. It was wonderful because it gave a huge boost to Carole, staff and patients on the ward. It was a joy for Carole to be able to share our day with everyone on the ward.

“There was a guard of honour outside the room with the doctors and staff and they all threw confetti. It was absolutely wonderful and she was blown away.

“In my heart I feel it gave us a belief in people. Everything that the hospital did for us, that will remain with us. It meant a lot.”

It has been a difficult year for Carole who has suffered other separate health conditions. Carole is originally from Portsmouth and moved to Wirral in 1987.

Jean said: “She is very poorly. She is in the later stages and has fast recurring cancer. It has all just happened so quickly.

“Carole is so warm and kind. She’s a Trojan. She’s still just thinking about everyone else and wanting to make sure everyone else is alright.”

Staff at the hospital worked hard to make the preparations for the wedding and felt honoured to be part of Carole and Jean’s special day.

Dr Nikki Stevenson, Medical Director and Deputy Chief Executive at Wirral University Teaching Hospital, said: “Staff on the ward were really honoured to be part of the celebrations and to see how happy Carole and Jean were on getting married.

“Our staff really care about our patients and wanted to do everything they could to set up the wedding and create a special day for them. It’s humbling for our staff on the ward to have shared the experience with Carole and Jean.” 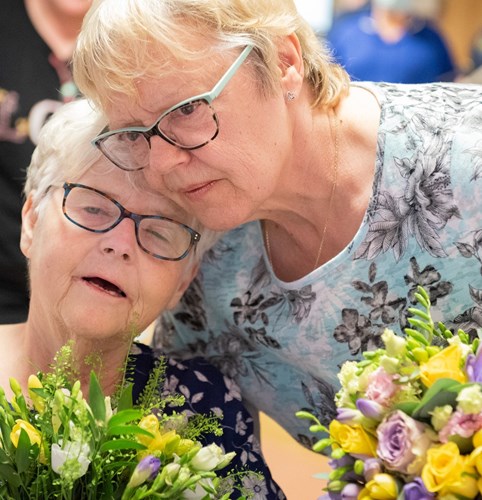 Pictured - Carole and Jean on their Wedding Day.