The updated interior was partly funded by the £150,000 that was raised through the WUTH Charity COVID-19 Support Fund which was a joint appeal by Wirral University Teaching Hospital (WUTH) and the Wirral Globe. WUTH runs both Arrowe Park Hospital and Clatterbridge Hospital.

The aim of the appeal, which was held during the height of the pandemic, was to raise funds for a project that would enhance wellbeing for Trust staff and its volunteers.

After renovation plans were announced, staff at the Trust voted for the name of the new restaurant.

The project was only made possible thanks to the generosity of the public and staff who spent their own time during the pandemic raising funds. It will be a legacy for the Trust that will last many years and will benefit thousands of people. In future it will be opened up for visitors to also use the facility.

Funding from NHS Charities Together national urgent COVID-19 appeal has also contributed towards the cost of the refurbishment.

Replacing the former Bowman’s Restaurant in the hospital, The Retreat is a modern coffee shop-style eatery with breakout areas for staff to have downtime.

The decision to revamp the restaurant came after Trust workers were asked for feedback on how they would like to see the funds spent.

Janelle Holmes, Chief Executive at Wirral University Teaching Hospital, said: “It really is amazing to see such a fantastic facility opened in the hospital. We have a real commitment to supporting staff wellbeing and the new restaurant will be a huge benefit for everyone.

“We are extremely grateful for all the support the community has shown our staff over the past few years, it means such a lot. It is great to see this fabulous facility opened as a result of all the tremendous efforts.”

Victoria Burrows, WUTH Charity Head of Fundraising, said: “It is great to see The Retreat open for all our staff to enjoy.

“Staff worked so hard throughout the pandemic, and it is amazing that we now have a new place for them to unwind during their much-earned breaks.

“I would once again like to say a big thank you to everyone who shared the appeal and raised funds. Without your help none of this would have been possible.” 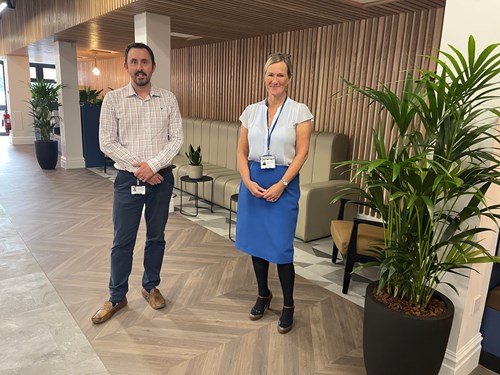