Former boxing champion of the world Tony Bellew joined participants for WUTH Charity’s abseil down the front of Arrowe Park Hospital to raise funds for The Wirral Women and Children’s Hospital’s Neonatal Unit.

The boxing cruiserweight joined Matthew Swanborough, Chief Strategy Officer at Wirral University Teaching Hospital, as the first participants to brave the dreaded drop on day 2 of the fundraiser. Over 80 members of staff took part to raise the vital funds that will benefit the Trust’s smallest patients.

The abseil, which was first launched by WUTH Charity in 2019, is part of the ‘Tiny Stars’ appeal. All money raised will go towards the complete refurbishment of the intensive care unit that specialises in the treatment of our ill or premature newborn infants.

The Neonatal Unit is one of two Level 3 (highest level) intensive care units in Merseyside and Cheshire. It is the only unit in the area to provide both adult and Level 3 neonatal intensive care on the same site at Arrowe Park, meaning sick mums who have poorly babies can be cared for in the same hospital.

Matthew Swanborough, Chief Strategy Officer, after completing his abseil, said: “It was fantastic to take part in the abseil. I’d like to say a big thank you to our amazing charity team for organising the event. The money will make a huge difference as we continue the refurbishment of our neonatal unit.”

Candice Jardine, 30, also took on the Abseil to raise money for the very unit that, as she put it, saved her babies’ lives. 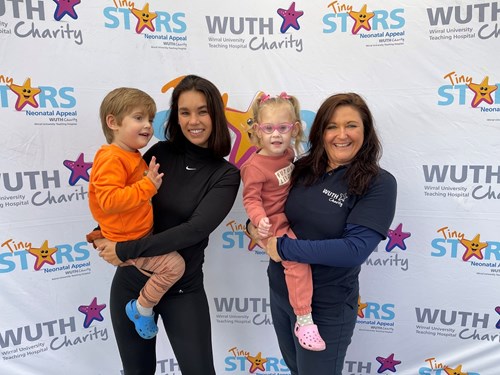 She said: “The work they do is incredible. I didn’t even know premature babies could be born at 25 weeks. My idea of a premature baby was 4/6 weeks early. The twins were so small when they were born and the work of everyone at the unit helped to save the lives of my babies. They are all superheroes.”

Candice kicked the event off on the Thursday with both Teddy and Sofia Dallinger, aged 3, watching on to support her.

“This is the second time I’ve participated in the abseil and I’ve loved every second of it. To have my babies here to watch is amazing”, she said.

Over 120 people took part this year and the event has raised over £20,000 to date, with more donations coming in and being counted by the team.

Victoria Burrows, Head of Fundraising, spoke on the success of the event. She said, “We’re so pleased that the abseil was received so well by everyone in the community. A big thank you to everyone who took part, whether that be abseiling, volunteering, or donating – and to the charity team here at WUTH. The Tiny Stars appeal is incredibly important to the Trust, and it is amazing to see so many people involved in the fundraising.”

For more information about WUTH Charity and the Tiny Stars appeal, please email wuth.charity@nhs.net or visit the Charity Office at the main entrance of Arrowe Park Hospital.